158 can be expressed as the sum of four or fewer squares. It is the sum of two primes. If you repeatedly halve it or multiply by three and add one depending on whether it is even or odd respectively you eventually reach 1.

158 is also the approximate length in minutes of the Cross Country train journey from Manchester Piccadilly to Cheltenham Spa that is currently providing me with no free wifi with which to determine interesting properties of integers.

Now, on with the Carnival!

Here are some interesting maths bits from the past month, which I had the foresight to open in tabs before I left the flat. 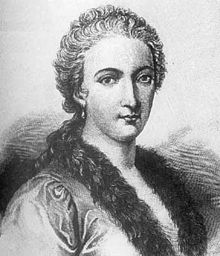 We celebrate the lives of three differently extraordinary mathematicians. Writing for the Smithsonian (yes that one), Evelyn Lamb recounts the life of Maria “Witch Of” Agnesi, and the curve that bears her name (and a mistranslated epithet). Edward Dunne at the AMS wishes happy 119th Birthday to Otto Neugebauer, who founded Mathematical Reviews and stood up to Nazism while doing it. And Futility Closet celebrates the very special ‘life’ of John Rainwater.

Of course, what you really come to the Carnival for is some abstract algebra. To this end, Rob J Low provides a crash course in equivalence classes and quotient spaces; Benjamin Leis shows us how to construct a model of the group $Q_8$ with just some card and three colours of dental floss (I have some in white you can borrow if you have two other colours…); and Mark Dominus recounts a (slightly one-sided) conversation with his daughter about mathsy card game Spot It!, known round these parts as Dobble, and explains how to construct some simpler versions.

If that whets your appetite for maths-based games/parenting, why not try the Function Machine Game? It’s a big hit with Brent Yorgey’s son, and eventually you might understand free theorems too. Meanwhile, if you want to let cardboard-based artificial intelligences play your games for you, Matthew Scroggs has worked out how much space you’ll have to clear out to have room for matchbox-based computers to play various games. Two posts that are one way or another about convex geometry: Richard Elwes has had a fun afternoon constructing various convex polyhedra out of Magform — other magnet-based geometry contruction sets are available and apparently equally willing to post freebies to random internet mathematicians.

In somewhat more mindbending maths, David Orden explains some new results relating to Carathéodory’s theorem, to do with the properties of a point chosen inside the convex hull of a set of other points, including one excellently known as ‘Turkey depth’.

When he’s not tweeting maths facts from a terrifying number of Twitter accounts, John Cook occasionally dabbles in the longer form of maths exposition, and has an investigation into the robustness of the t-test — it works fine with normal distributions, but how does it cope with less pleasantly symmetric options? Some mild maths frivolity to round things off. Richard Lipton ponders the implications of actor and crank-slash-master-interview-troller Terrence Howard’s assertion that one times one is in fact two. And Marquis de Geek has written about a Twitter bot created to incessantly churn out chunks of the decimal expansion of Pi.

That’s it for this edition! Next month the Carnival will be hosted by Kartik at Comfortably Numbered. If you see any other good maths blog posts, YouTube videos or other new online content in the next month, send it in using the form linked to on the Carnival of Maths page.

One Response to “Carnival of Mathematics 158”