As part of the 24 Hour Maths Game Show which took place at the end of October 2022, our own Christian Lawson-Perfect designed a maths/games crossover gameshow format to end them all – a mashup of hexagon-fighting TV quiz Blockbusters, and his own personal obsession: interesting mathematical factoids. Welcome to Blockbusters of Interesting Maths!

Here’s a round-up of mathematical things that happened in June, and things you might want to know about that are happening in the future!

On 23rd June the new Alan Turing £50 note was launched, featuring an image of Turing, a quote and various mathematical diagrams. Bletchley Park marked the occasion with a #Turing50Takeover, and the Bank of England has a whole page of info about the new polymer note on their website.

Meanwhile, in Turing-adjacent news, the National Museum of Computing has launched an online Virtual Enigma machine you can use to simulate the device behind the famous Enigma code, along with a video explaining the machine. This joins a host of other virtual historical computers they’ve built, including the Colossus that cracked the code, the Lorenz machine and even ERNIE the random number generator!

Another claimed proof of the Riemann Hypothesis, this time by Kumar Easwaran, emerged this month, and since like all big claims it would need thorough checking before acceptance by the mathematical community, there was some initial skepticism. (This didn’t stop the media from latching on to it as an exciting story though). Since claimed proofs of Riemann are like buses, many mathematicians don’t give them much attention, but Alex Kontorovich took the time to thoroughly debunk this one to save you the trouble.

If you want some actual Riemann Hypothesis news, here’s some: John Baez reports that Alain Connes and Caterina Consani have made some potential progress on part of the problem. In the words of Baez, “my interest is piqued”.

Thuses is a website for mathematicians to publish and discuss ideas of interest to the mathematical community. It’s described as “a perfect place to share new approaches, slick proofs, and surprising counterexamples. A place for ‘folklore results’ that are considered known but don’t actually exist in literature. A place for everything in math that just has to be shared.” (via Piper H)

The Royal Society has published a set of papers on modelling that shaped the early COVID-19 pandemic response in the UK as a special journal issue that’s free to access.

The BSHM (British Society for the History of Mathematics) has launched the Bibby Awards in the History of Mathematics, for “contributions to the popularization of the history of mathematics in education”. Named after (and funded by the legacy of) the late BSHM member Neil Bibby, up to four awards of £400 can be made each academic year, in return for which holders are expected to give two free talks in schools and produce four digital resources (videos, PDFs or interactives) for the BSHM website. (via Sarah Hart)

The Isaac Newton Institute in Cambridge is hosting The unity of mathematics: A conference in honour of Sir Michael Atiyah which will take place in September 2021 as a hybrid event with a mixture of in-person and virtual talks. The closing date for registration for physical participants is 8th August.

There’s just about still time to register for the People, Places, Practices History of Maths Conference (registration closes 9th July) taking place 12-15 July online (coordinated by the University of St. Andrews). With around 90 speakers contributing, the programme looks packed, and talks will be available to watch ahead, or at the specified time to be followed by a live Q&A.

Alexandre Borovik reports on his blog about Azat Miftakhov day, an event organised online by the Azat Miftakhov committee in solidarity with Azat Miftakhov – a graduate student from Moscow State University who was sentenced to six years in a medium-security penal colony and has already been arbitrarily detained by Russian state authorities for almost two and a half years. Fields medalist Cedric Villani made a speech at the event, and you can watch videos from the event on YouTube.

The Bank of England has announced, following a public poll, that the new £50 note will feature mathematician, cryptographer and computer science pioneer Alan Turing. While this might seem like unambiguous good news, the issues it raises are more complicated than they first appear. Here’s a guest post from LGBT+ mathematician Calvin Smith with his thoughts on the decision.

It’s obviously fabulous that Alan Turing is being recognised on the new £50 note, but this joy at seeing a gay mathematician given this recognition is tainted with the memory of his cruel treatment by the society of the day and the ongoing persecution of queer and trans people today.

On the 15th of May 1951 the BBC broadcast a short lecture by the mathematician Alan Turing under the title Can Computers Think? This was a part of a series of lectures on the emerging science of computing which featured other pioneers of the time, including Douglas Hartree, Max Newman, Freddie Williams and Maurice Wilkes. Together they represented major new projects in computing at the Universities of Cambridge and Manchester. Unfortunately these recordings no longer exist, along with all other recordings of Alan Turing. So I decided to rerecord Turing’s lecture from his original script.

Every one to two weeks a new chapter of the six-chapter story is released, and each chapter has a new cryptographic puzzle to solve. Teams consisting of up to four people can win prizes for being the first to solve each puzzle, and also for being randomly picked from all correct entries for each puzzle. 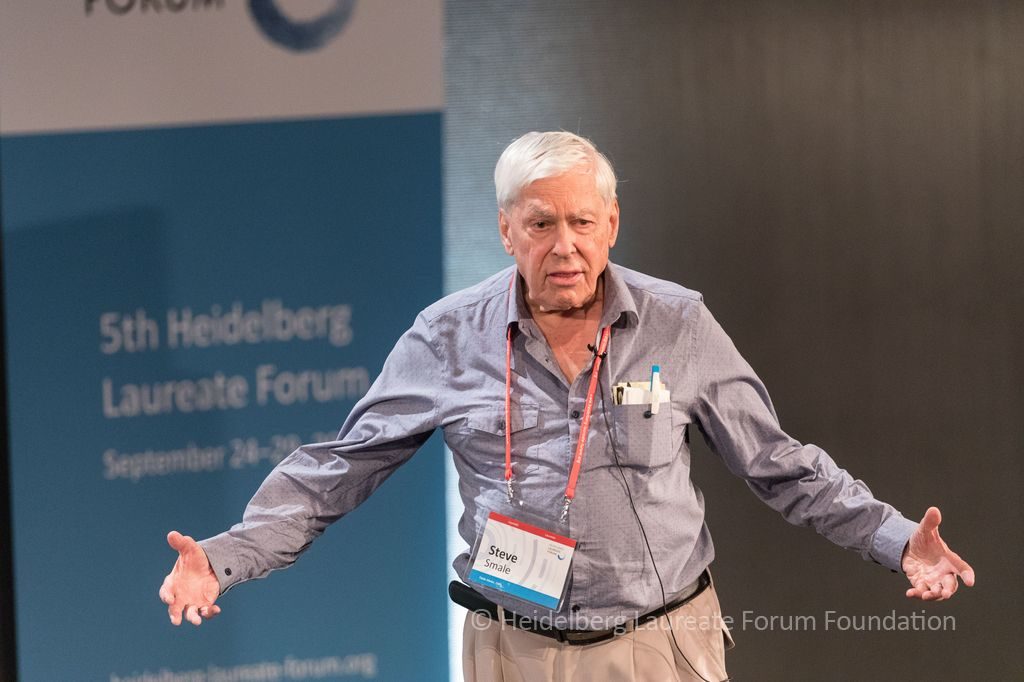 The closing talk of the HLF’s main lecture programme (before the young researchers and laureates head off to participate in scientific interaction with SAP representatives to discuss maths and computer science in industry) was given by Fields Medalist Steve Smale.

Registration for the 2017 Alan Turing Cryptography Competition is now open!