Last week I spent two days in York giving talks. Firstly I gave an evening lecture to the York University Maths Society (YUMS) on Puzzles. I found this highly enjoyable. I think was the first talk I have written that I was looking forward to giving rather than being preoccupied with anxiety on its first outing. I gave a number of puzzles for the audience to work through, talked through a little of the history of puzzles and then we had a session at the end with my collection of puzzles for the audience to play with (pictured below). Following this, YUMS and I retired to the bar for some beer and darts. 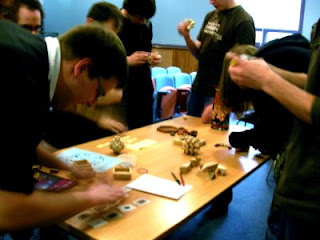 The following morning I went to the maths department (pictured below) for the careers fair. One of the students told me that when I offered to give my careers talk to the department the staff asked the students if they wanted a maths careers talk. The students said they did, and a maths-specific careers fair as well. It is nice to know that I inadvertently started the event! The day was organised jointly by the Careers Service and the Department of Mathematics, and advertised by YUMS as well. I think this combination really helped because the turnout was excellent. I was to give my careers talk to open the day. All the seats were gone and there were people sitting and standing at the back and in the aisles, and they were turning people away! I gave my talk and I think it went well, then we arranged I would give it again for the people who had been turned away. In total my helper for the day, York undergraduate Yi Ding, counted 80 students in the two sittings. As well my stall was hard at work without me; the organisers told me it was one of the most popular stalls even without me attending to it!

The best part of the day for me was when I was speaking to the lady from the TeachFirst stall. She said that usually when she comes to university careers fairs she finds the students naïve about the nature of the jobs market. She told me the students coming out of my talks were clued in and motivated to explore possible careers options. She said they kept telling her about the talk they’d just been in and what I had said about skills and employment prospects. This is brilliant to hear, a huge ego boost. 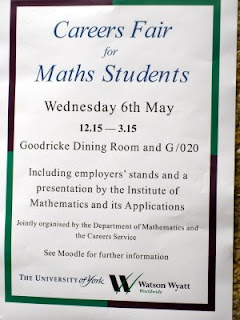