The shirt symbolizes the formality of a male-dominated society and of conformance to society’s rules. Mathematics, too, is a realm of formality and rules populated largely by men. Yet in both shirts and mathematics there is room for creativity and individuality.

In The Mathematician’s Shirt project, artist Madeleine Shepherd and mathematician Julia Collins set about challenging these notions by turning a collection of formal shirts (donated by mathematicians!) into mathematical art. Inspired by the work of mathematicians in Edinburgh, the fabric of the shirts got twisted into 4-dimensional shapes, woven into knots and stitched into different geometries.

In June 2011, Julia and Madeleine were among four scientist/artist teams awarded small grants by ASCUS Art Science Collaborative to create new work. ASCUS mounted an exhibition of all the teams’ work in an empty shop in Edinburgh’s St James Centre in January 2012. The shirts were ideal for creating an eye-catching window display. To the casual passer-by these shirts appeared to be some crazy new piece of fashion, but closer inspection revealed that these shirts were never meant to be worn. For example, the ‘Klein Bottle’ shirt had the collar and waist sewn up, the buttons buttoned up the front, and one of the sleeves turned inside out. This sleeve was then passed through the front of the shirt, where its cuff was sewn to the cuff of the second sleeve. Thus there were no openings for anyone to don the shirt, and indeed the resulting creation was an example of an object which has no inside or outside! Mathematically it is known as a non-orientable surface and can only truly exist in 4 dimensions; in 3 dimensions the surface is obliged to pass through itself, like the sleeve passes through the front of the shirt.

Another pair of unwearable shirts consisted only of the collars and shoulders, the rest of the shirts having been torn into strips, knitted into ropes and tied into knots with metal wire threaded through. The knots which had been tied had special significance. One knot, labelled 61 because it crossed over itself six times, had appeared in Julia’s thesis as an example of a slice knot – a knot which is a slice through a sphere knotted in the 4th dimension. The other knot, 819, was the smallest example of a non-alternating knot; that is, a knot which cannot be positioned in space so that the string goes over-under-over-under itself. The most striking set of shirts were a collection of three shirts which had been lengthened by the addition of colourful patchwork shapes. The yellow shirt’s patchwork was made of pentagons, which curved in on themselves to form a ball-shape. The orange shirt had hexagons, which fell completely straight, while the red shirt had heptagons, flaring out like a dress. These three types of geometry are known to mathematicians as spherical, flat and hyperbolic respectively, and it is only in flat geometry that the angles in a triangle add up to 180 degrees. Hyperbolic geometry was only discovered in the 19th century by mathematicians, but had been used by dressmakers for centuries!

The final pair of shirts did not represent a mathematical idea, but rather mathematical culture. The shirts, one white and one black, held hands at the entrance to the exhibit, symbolising the whiteboards and blackboards which mathematicians use every day to communicate their work and express their ideas. The white shirt was covered in colourful doodles: equations, diagrams, sketches and notes, meticulously drawn by the mathematicians at the University of Edinburgh over the course of a single day. The black shirt had photos of blackboards printed and stitched on, with details picked out and embroidered beside them. One of the pieces of embroidery was itself a puzzle, encouraging visitors to work out the connection between a sequence of numbers and the photo of a coloured graph.

Since the exhibition in January the shirts have been on display a couple of times at the International Centre for Mathematical Sciences in Edinburgh and you can see them between 3 and 5 August in Madeleine’s studio at the Coburg House Art Studios Festival Open Event.  If you’d like to include the shirts in an event or exhibition please contact them through themathematicansshirts.wordpress.com. 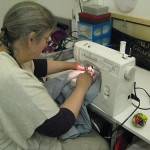 Madeleine at work on the Klein Bottle shirt 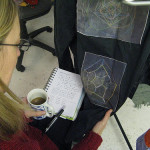 Julia at work on the Blackboard Shirt 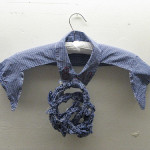 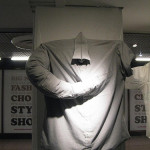 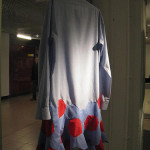 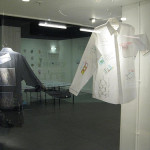 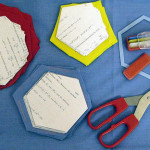 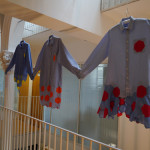 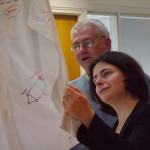 Shirts and mathematicians at ICMS