Before Christmas, we launched a winter-themed maths competition – to design a sensible hexagonal snowflake, using a square grid, which could be used to knit a wintery jumper and not a) look terrible or b) have non-hexagonal symmetry. We had a deluge of entries, some valid and others less so – in fact, we may have had at least one entry break each of the rules we set. Below is a round-up of all the entries we received.

Our first category was the Actual Knitted Entry category, in which we were looking for a knitted snowflake design, including proof you’ve actually just knitted it, and we received this Christmas cracker (by which I mean, a cracking entry in our Christmassy competition, not an actual Christmas cracker) from Nicola Ede. See! IT IS POSSIBLE! Nicola wins a deck of Math Stack playing cards.

We also had another knitted entry from maths knitting veteran Madeleine Shepherd, who used a more high-tech approach for her entry – she admits it’s larger than our competition guidelines specify, and was very slightly after the submission deadline, but her entry involved taking an actual microscope photo of a snowflake, converting it to two colours and feeding it into a knitting machine that’s been hacked together with an Arduino. She’s got several other photos of knits she’s done in this way, and while 190 stitches square is a bit too big for our competition, we thought it deserved a special mention. 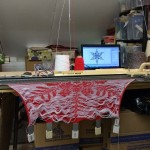 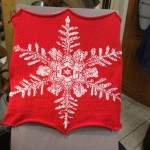 We also received several brilliant entries in our Non-Knitted category, including some from Alexis Farmer, who not only entered several images, but also wrote an online snowflake generator, which lets you create symmetrical patterns by clicking the squares. Unfortunately, Alexis’ snowflakes have rotational symmetry, but not reflection symmetry, so they’re not valid entries to the competition. But we’re still hugely impressed, especially with his inclusion of some mathematical curiosities in some of the designs! 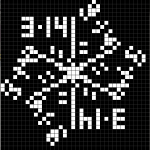 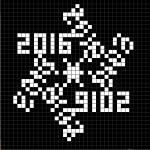 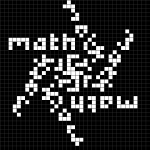 This has literally got maths in it 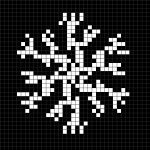 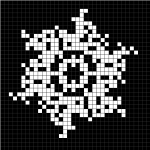 The requirement to produce hexagonal symmetry using a square grid was part of what’s difficult about this challenge – yet, we had several entries from Hugo Lenokh in which he’s just decided to use triangular pixels instead – an admirable attempt, but not quite what we were looking for. This was the only entry we received to take advantage of our ‘you can use as many colours as you like’ rule, but sadly not quite valid for the competition – although still pretty beautiful! 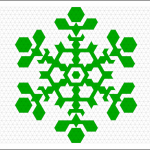 Nice use of hexagons 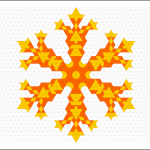 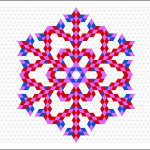 Now to our winning entry, which was from David Swart, and not only actually managed to follow all the rules of the competition, but is also a pretty decent snowflake design, which would look good on a jumper. David sent in a few entries, including a couple of diagonally projected snowflakes (a good cheat to get around the angles issue), but also this beautiful square entry: Congratulations, David! You win an actual knitted item incorporating your design, and a set of Fiendish Numbers!

Incidentally, we were also sent a link to this sweater available from GAP (pictured left), which has a pretty decent hexagon snowflake. This one technically breaks the ‘send us a progress photo to prove you knitted it yourself’ rule. But at least we know what to buy Matt for Christmas 2016!