This year pickings are slim – quite a few mathematical Fringe regulars are having the year off – but there are a couple of shows which have maths as a definite theme: 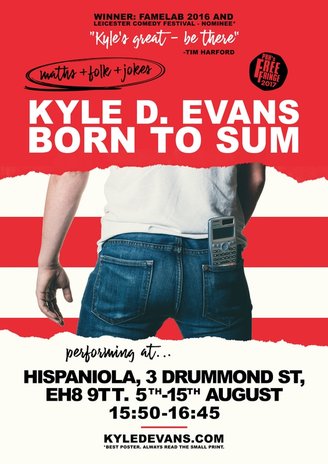 Mathematician, maths teacher and UK FameLab champion Kyle Evans is taking his maths/folk/comedy music show to Edinburgh, and will be performing his trademark mathematical songs.

Self-proclaimed ‘Mathemagician’ Jason Davidson performs another of his family maths magic shows, suitable for all ages.

The Edinburgh Skeptics have put on a whole month of talks on different topics, although sadly only one of them has a maths theme (and that’s because it’s literally me, doing my Mathematical Life Hacks show on Thursday 24th August).

I’ve also found a collection of things which aren’t mathematical, but definitely involve science in some way and you may enjoy them. Here’s their programme blurbs and ticket links – enjoy!

One Response to “Maths at the Edinburgh Fringe”