The recent announcement of “Pariah Moonshine” has been one of the most exciting developments in the relationship between numbers and symmetries in quite some time. In this blog post I hope to explain the “Pariah” part, which deals mostly with symmetries. The “Moonshine”, which connects the symmetries to numbers, will follow in the next post.

What is a symmetry?

First I want to give a little more detail about what I mean by the symmetries of shapes. If you have a square made out of paper, there are basically eight ways you can pick it up, turn it, and put it down in exactly the same place. You can rotate it 90 degrees clockwise or counterclockwise. You can rotate it 180 degrees. You can turn it over, so the front becomes the back and vice versa. You can turn in over and then rotate it 90 degrees either way, or 180 degrees. And you can rotate it 360 degrees, which basically does nothing. We call these the eight symmetries of the square, and they are shown in Figure 1. 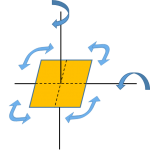 Figure 1. The square can be rotated into four different positions, without or without being flipped over, for eight symmetries total. 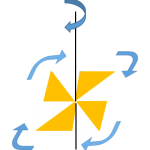 Figure 2. The pinwheel can be rotated but not flipped, for four symmetries total. 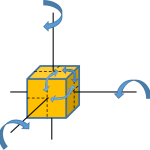 Figure 3. The cube can be rotated along three different axes, resulting in 24 different symmetries.

These symmetries don’t just come with a count, they also come with a structure. If you turn a square over and then rotate it 90 degrees, it’s not the same thing as if you rotate it first and then flip it over. (Try it and see.) In this way, symmetries of shapes are like the permutations I discuss in Chapter 3 of my book, The Mathematics of Secrets: you can take products, which obey some of the same rules as products of numbers but not all of them. These sets of symmetries, which their structures, are called groups.

Groups are sets of symmetries with structure 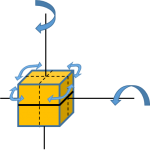 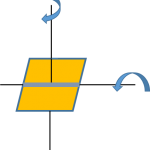 Figure 5. The symmetries of a square with line through it. We can turn the square 180 degrees and/or flip it, so there are four. 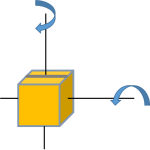 As early as 1892, Otto Hölder asked if we could categorize all of the finite simple groups.

There are also shapes, like the circle, which have an infinite number of symmetries. We won’t worry about them now.

It wasn’t until 1972 that Daniel Gorenstein made a concrete proposal for how to make a complete categorization, and the project wasn’t finished until 2002, producing along the way thousands of pages of proofs. The end result was that almost all of the finite simple groups fell into a few infinitely large categories: the cyclic groups, which are the groups of symmetries of pinwheels with a prime number of arms, the alternating groups, which are the groups of symmetries of solid hypertetrahedra in 5 or more dimensions, and the “groups of Lie type”, which are related to matrix multiplication over finite fields and describe certain symmetries of objects known as finite projective planes and finite projective spaces. (Finite fields are used in the AES cipher and I talk about them in Section 4.5 of The Mathematics of Secrets.)

Even before 1892, a few finite simple groups were discovered that didn’t seem to fit into any of these categories. Eventually it was proved that there were 26 “sporadic” groups, which didn’t fit into any of the categories and didn’t describe the symmetries of anything obvious — basically, you had to construct the shape to fit the group of symmetries that you knew existed, instead of starting with the shape and finding the symmetries. The smallest of the sporadic groups has 7920 symmetries in it, and the largest, known as the Monster, has over 800 sexdecillion symmetries. (That’s an 8 with 53 zeros after it!) Nineteen of the other sporadic groups turn out to be subgroups or quotient groups of subgroups of the Monster. These 20 became known as the Happy Family. The other 6 sporadic groups became known as the ‘Pariahs’.

The shape that was constructed to fit the Monster lives in 196883-dimensional space. In the late 1970’s a mathematician named John McKay noticed the number 196884 turning up in a different area of mathematics. It appeared as part of a function used in number theory, the study of the properties of whole numbers. Was there a connection between the Monster and number theory? Or was the idea of a connection just … moonshine?

5 Responses to ““Pariah Moonshine” Part I: The Happy Family and the Pariah Groups”