This post is part of a series of posts by guest author Joshua Holden.

I ended Part I with the observation that the Monster group was connected with the symmetries of a group sitting in 196883-dimensional space, whereas the number 196884 appeared as part of a function used in number theory, the study of the properties of whole numbers.  In particular, a mathematician named John McKay noticed the number as one of the coefficients of a modular form.  Modular forms also exhibit a type of symmetry, namely if F is a modular form then there is some number k for which

There are also some conditions as the real part of z goes to infinity.

In 1954, Martin Eichler was studying modular forms and observing patterns in their coefficients.  For example, take the modular form

I don’t know whether Eichler actually looked at this particular form, but he definitely looked at similar ones.

This equation is an example of what is known as an elliptic curve, which is a curve given by an equation of the form

Elliptic curves are not ellipses!

Elliptic curves have one line of symmetry, two open ends, and either one or two pieces, as shown in Figures 1 and 2. They are called elliptic curves because the equations came up in the seventeenth century when mathematicians started studying the arc length of an ellipse.  These curves are considered the next most complicated type of curve after lines and conic sections, both of which have been understood pretty well since at least the ancient Greeks.   They are useful for a lot of things, including cryptography, as I describe in Section 8.3 of The Mathematics of Secrets. 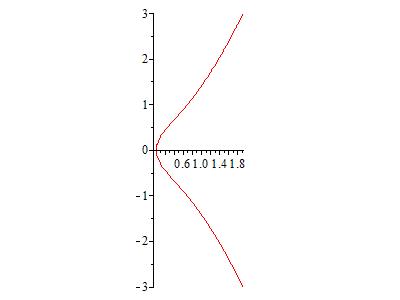 Figure 1. The elliptic curve y2= x3 + x has one line of symmetry, two open ends, and one piece. 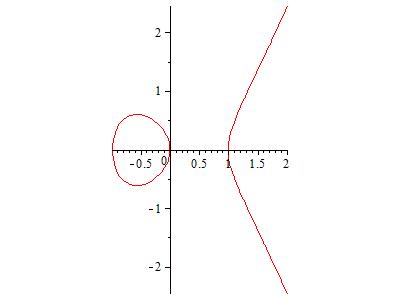 Modular forms, the Monster, and Moonshine

Modular forms are also related to other shapes besides elliptic curves, and in the 1970’s John McKay and John Thompson became convinced that the modular form

Terry Gannon points out that there is also a hint that the conjectures “distill information illegally” from the Monster.

John Conway and Simon Norton formulated some guesses about the exact connection between the Monster and V♮, and gave them the name “Moonshine Conjectures” to reflect their speculative and rather unlikely-seeming nature. A plausible candidate for V♮ was constructed in the 1980’s and Richard Borcherds proved in 1992 that the candidate satisfied the Moonshine Conjectures.  This work was specifically cited when Borcherds was awarded the Fields medal in 1998.

The construction of V♮ turned out also to have a close connection with mathematical physics.  The reconciliation of gravity with quantum mechanics is one of the central problems of modern physics, and most physicists think that string theory is likely to be key to this resolution.  In string theory, the objects we traditionally think of as particles, like electrons and quarks, are really tiny strings curled up in many dimensions, most of which are two small for us to see.  An important question about this theory is exactly what shape these dimensions curl into.  One possibility is a 24-dimensional shape where the possible configurations of strings in the shape are described by V♮.  However, there are many other possible shapes and it is not known how to determine which one really corresponds to our world.

The “modular” in “Modular Moonshine” is related to the one in “modular form” because they are both related to modular arithmetic, although the chain of connections is kind of long.

Since Borcherds’ proof, many variations of the original “Monstrous Moonshine” have been explored.  The other members of the Happy Family can be shown to have Moonshine relationships similar to those of the Monster.  “Modular Moonshine” says that certain elements of the Monster group should have their own infinite dimensional shapes, related to but not the same as V♮.  “Mathieu Moonshine” shows that one particular group in the Happy Family has its own shape, entirely different from V♮, and “Umbral Moonshine” extends this to 23 other related groups which are not simple groups.  But the Pariah groups remained outsiders, rejected by both the Happy Family and by Moonshine — until September 2017.

2 Responses to ““Pariah Moonshine” Part II: For Whom the Moon Shines”