In Part I of this series of posts, I introduced the sporadic groups, finite groups of symmetries which aren’t the symmetries of any obvious categories of shapes. The sporadic groups in turn are classified into the Happy Family, headed by the Monster group, and the Pariahs. In Part II, I discussed Monstrous Moonshine, the connection between the Monster group and a type of function called a modular form. This in turn ties the Monster group, and with it the Happy Family, to elliptic curves, Fermat’s Last Theorem, and string theory, among other things. But until 2017, the Pariah groups remained stubbornly outside these connections.

In September 2017, John Duncan, Michael Mertens, and Ken Ono published a paper announcing a connection between the Pariah group known as the O’Nan group (after Michael O’Nan, who discovered it in 1976) and another modular form. Like Monstrous Moonshine, the new connection is through an infinite-dimensional shape which breaks up into finite-dimensional pieces. Also like Monstrous Moonshine, the modular form in question has a deep connection with elliptic curves. In this case, however, the connection is more subtle and leads through yet another set of important mathematical objects: the quadratic fields.

At play in the fields quadratic

It’s also possible to have fields of things that aren’t numbers, which are useful in lots of other situations — see Section 4.5 of The Mathematics of Secrets for a cryptographic example.

For technical reasons, a quadratic field is identified by taking all of the integers whose square roots would give you that field, and picking out the integer $D$ with the smallest absolute value that can be written in the form $b^2 – 4ac$ for integers $a$, $b$ and $c$. This number $D$ is called the fundamental discriminant of the field. So, for example, $8$ is the fundamental discriminant of the quadratic field we’ve been talking about, not $2$, because $8 = 4^2 – 4 \times 2 \times 1$, but $2$ can’t be written in that form.

After addition, subtraction, multiplication, and division, one of the really important things you can do with rational numbers is factor their numerators and denominators into primes. In fact, you can do it uniquely, aside from the order of the factors. If you have number in a quadratic field, you can still factor it into primes, but the primes might not be unique. For example, in the rational numbers adjoined with the square root of negative 5 we have

where $2$, $5$, $1+\sqrt{-5}$, and $1-\sqrt{-5}$ are all primes. You’ll have to trust me on that last part, since it’s not always obvious which numbers in a quadratic field are prime. Figures 1 and 2 show some small primes in the rational numbers adjoined with the square roots of negative 1 and negative 3, respectively, plotted as points in the complex plane.

Figure 1. Some small primes in the rational numbers adjoined with the square root of -1 (D = -4), plotted as points in the complex plane. By Wikimedia Commons User Georg-Johann.) 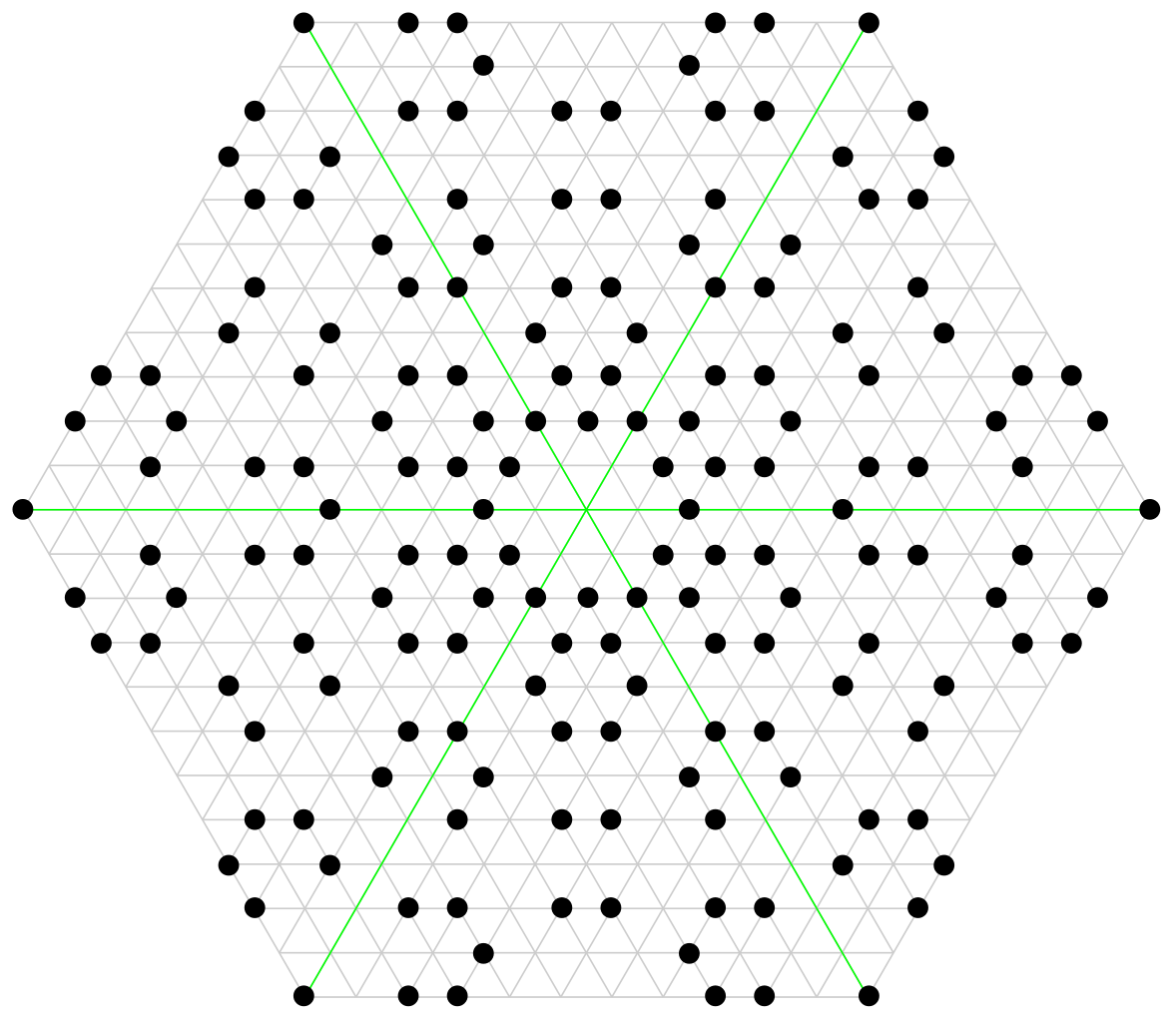 Figure 2. Some small primes in the rational numbers adjoined with the square root of -3 (D = -3), plotted as points in the complex plane. By Wikimedia Commons User Fropuff.)

What about Moonshine? Duncan, Mertens, and Ono proved that the O’Nan group was associated with the modular form

Mathematicians say a symmetry that gets you back where you started after you do it $n$ times is a “symmetry of order $n$”.

How much Moonshine is out there? 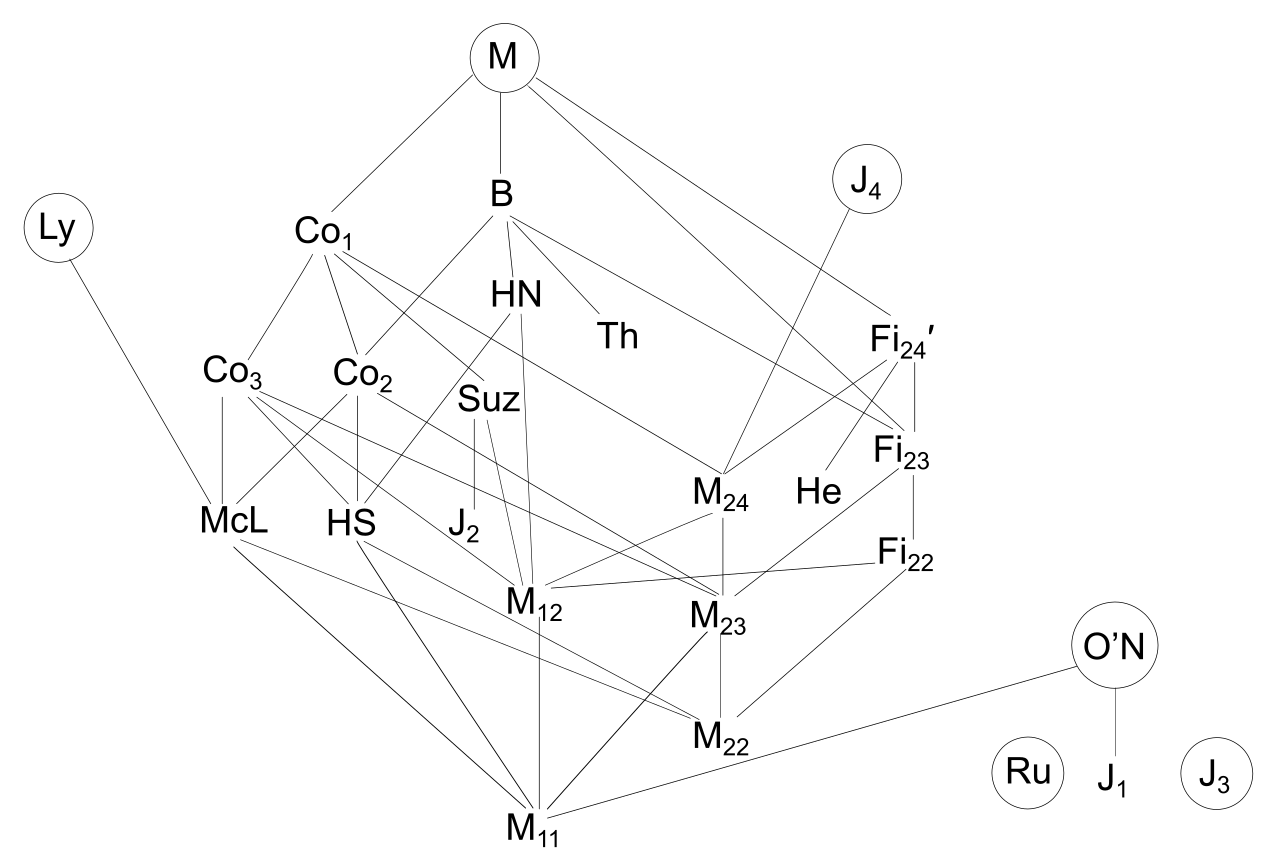 Figure 3. Connections between the sporadic groups. Lines indicate that the lower group is a subgroup or a quotient of a subgroup of the upper group. “M” is the Monster group and “O’N” is the O’Nan group; the groups connected below the Monster group are the rest of the Happy Family. (By Wikimedia Commons User Drschawrz.)

The modular form in O’Nan Moonshine is “weight $3/2$”. Weight $3/2$ modular forms are less closely tied to elliptic curves, but are tied to yet more ideas in mathematical physics, like higher-dimensional generalizations of strings called “branes” and functions that might count the number of states that a black hole can be in.

That still leaves four more pariah groups, and the smart money predicts that Moonshine connections will be found for them, too. But will they come from weight $0$ modular forms, weight $3/2$ modular forms, or yet another type of modular form with yet more connections? Stay tuned! Maybe someday soon there will be a Part IV.