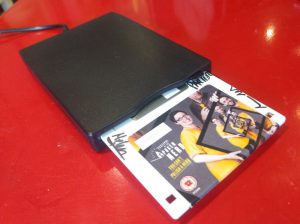 However, since the Nerds are currently riding an exponential curve of silliness in their DVD release schedule (their last show Just for Graphs was released on VHS as well as DVD) this time the show has been released as an autographed limited edition set of 3.5″ floppy disks, one of which was sent to me in the post.

Each of the disks contains one 30-second segment of the show, and I’ve been sent disk number #211, containing seconds 6300 through to 6330 of science comedy content. I was apprehensive, as I know there are many different parts to the show, and I was hoping for one with some mathematical content that our Aperiodical readers here could really appreciate.

Probabilistically, this wasn’t much of a worry – even though the show covers a range of topics, there’s plenty of maths behind all of them. Singer and physicist Helen includes a song about the relative radioactive exposure from different daily activities, each given in terms of in the Banana Equivalent Dose (the amount of radioactivity you’re exposed to from eating a banana), while experiments guy Steve takes a break from exploding things to tell us about his attempts to find meaning in the sentence “the temperature outside a plane is six times colder than the temperature inside a freezer”, a struggle long-term Aperiodical readers will be familiar with, and Steve’s initial response to which is now immortalised in t-shirt form.

The show also contains a wonderful thread of purely maths content from in-house number ninja Matt Parker, who tells us of his campaign to rid the UK’s signage of geometrically inaccurate football symbols – just one of a range of bits on geometrical topics: from his struggles tiling his own bathroom, to playing with stereographic projections and spherical camera footage. 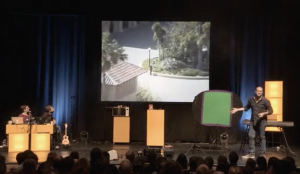 The 30-second clip on my disk is from a section on recursive spirals, inspired by the MC Escher lithograph of a person looking at a painting of a city in which there’s an art gallery through the window of which can be seen that same person, and in the show Matt takes this idea and runs with it… maybe slightly too far.

My impression of this 30-second clip was that it was a little out of context and could have done with a better explanation to introduce what Matt was talking about (he also seemed to just start talking mid-sentence, and didn’t really round off what he was saying at the end of the clip either – it’s a bit of a cliffhanger); we also didn’t get to see much of Steve or Helen, apart from them being over on the left of the stage listening to Matt.

You’ll be pleased to hear that each floppy disk edition also comes with a code to download and watch the whole show, not just the 30 seconds on the disk. It can be ordered from the FOTSN online shop, along with a version of the show on DVD for normal people, which includes a ‘safer for schools’ soundtrack, behind-the-scenes DVD extras and an infinitely long DVD unboxing video extra (of course). There’s also a standalone download edition, for if you don’t want to be encumbered by messy real-world objects – or if, like the nerds themselves, you prefer the purity of buying just the ones and zeroes.

2 Responses to “Review: You Can’t Polish a Nerd, Floppy Disk #211 (Festival of the Spoken Nerd)”