The MathsJam conference has a baking competition. My friend the archaeologist Stephen O’Brien tweeted a while ago a link to a fun blog post ‘Edible Archaeology: Gingerbread Cuneiform Tablets‘. Babylonian tablets are among the earliest written evidence of mathematics that we have, and were produced by pressing a stylus into wet clay.

So it was that I realised I could enter some Babylonian-style tablets made from gingerbread.

I made a gingerbread reconstruction of a particular tablet, YBC 7289, which Bill Casselman calls “one of the very oldest mathematical diagrams extant“. Bill writes about the notation on the tablet and explains how it shows an approximation for the square root of two. I’m sure I didn’t copy the notation well, because I am just copying marks rather than understanding what I’m writing. I also tried to copy the lines and damage to the tablet. Anyway, here is my effort: 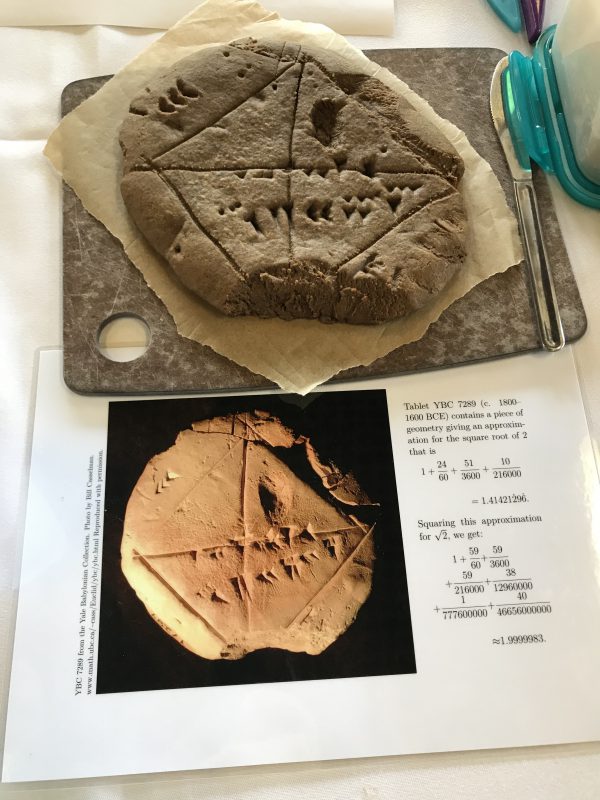 In addition, I used the rest of the dough to make some cuneiform biscuits. I tried to copy characters from Plimpton 322, a Babylonian tablet thought to contain a list of Pythagorean triples. Again, Bill Casselman has some interesting information on Plimpton 322. 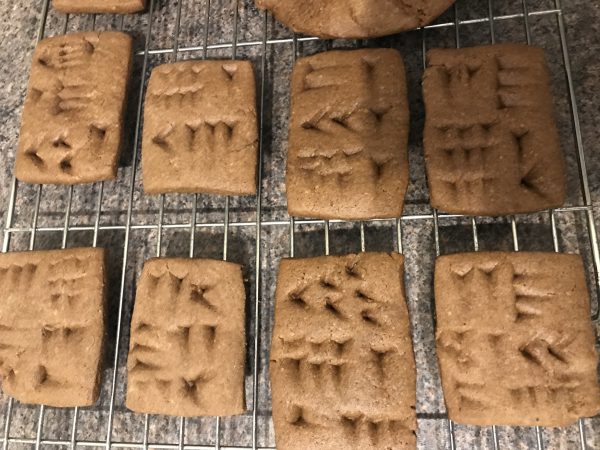 Below, I try to give a description of my method.

I tried the recipe given but I don’t know if I mistranslated the American cups measurements, but it came out too dry, so I adjusted the ingredients and tried again before making it the third time for real. Below is a description of what I did.

The idea here is to make a gingerbread that tastes good but crucially has the stiffness to take the cuneiform writing and that doesn’t rise much so the writing stays in place while it cooks. There’s a lot of chilling to harden the dough. I should mention that you make the dough one day and cook it the next.

Day one, mix the dough.

Probably by now you are firmly of the view that I am not a recipe writer! There is a lot more detail in the original blog post and I recommend reading this and watching the short video before starting.

I am grateful to Farrell Monaco for sharing her cuneiform gingerbread recipe, and to Bill Casselman for his pages on Babylonian mathematics tablets.