The dust is settling on the ninth Big MathsJam, and before I get too sad that it’s nearly a year until the next one, I put down some thoughts about what was so good about this one.

Some, like the organisers, insist on calling it the Annual Gathering. There aren’t many things Colin Wright gets wrong, but…

Colin Wright has announced the dates for 2019 as 30 November-1 December — Ed.

Every year – generally mid-November – around 200 mathematicians of every stripe gather in Staffordshire for a weekend of puzzles, talks, games, songs, cakes, competitions… all things mathematical are fair game.

The weekend is structured around eight sessions of short talks, the idea being that you can’t teach anything in five minutes, but you can show people something cool. Also, if there’s a talk that doesn’t interest you… so what? There’s another one along shortly.

Beyond the talks, there are competitions of varying complexity (a crossword puzzle that developed into a chess endgame! a mathematical horror story contest! a guess the number competition!) and a mathematical-themed bake-off. On the Saturday night, the musicians gather in a side space and play popular songs rewritten with mathematical lyrics, while others play games, fold origami, build polyhedra, juggle…

It’s hard to imagine a better way to spend a weekend. So what were the best bits?

Good grief, the standard was high this year. I’m looking over Andrew Taylor’s notes and thinking “oo! I’d forgotten that one, that was really interesting!” But I’m going to try to whittle them down to five, in the order that they spring to mind.

Tarim, on Snake Bridges: If you walk along a canal, you might notice a bridge like this: straight up on one side, a loop on the other. It turns out that this is so your tow rope doesn’t loop over or around the bridge as you barge along the canal. How neat is that? 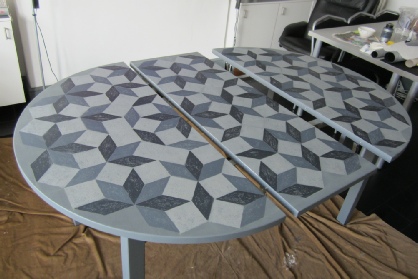 Pat Ashforth, on Extending Tables: How do you decorate an extending table with an aperiodic tiling? Cleverly and beautifully, using an Ammann tiling (which was sent their way by Penrose – and Pat has asked me to mention that it was Steve who did all the drawings to make it work!).

Tim Chadwick, on Nothing About Shells: My children are nearly-five and three-and-a-half. I come to MathsJam to escape from the Numberblocks. Tim, however, ran through the characters, pointed out how horrifying the plots can be, and (bizarrely) has something against the Octoblock. No accounting for taste.

Barney Maunder-Taylor, on Collapsible Polyhedra: It’s always important to carry Platonic solids with you – but they’re a bit bulky. So, how can you build ones that fold flat and pop out as needed?

Sam Hartburn, on The Battle of the Slinkies: One of several parents to make use of their children’s toys in a talk, Sam demonstrated the obvious superiority of the paper slinky over the plastic one. (I liked it best for the sound effect.)

(Several songs were recorded, and can be found here.)

MathsJam has grown year on year and is now at or about capacity for the venue. That makes for a very crowded room and a very crowded schedule – I felt like the breaks were getting a bit squashed, and I think I’d prefer somewhat fewer talks with somewhat longer recovery times between sessions.

Relatedly, while I love the Competition Competition, I’m not sure having a dozen people explaining their contests and awarding prizes is quite the best way to end the final session. (I don’t have an immediate solution to that – it’s just a lot less interesting than maths.)

I would have entered, and almost certainly won, had I not left mine on the train like a numpty

There’s a buzz in the room at a MathsJam. It’s people saying “I loved your talk, can you tell me more about…?”, or “Oh! I know you from Twitter!” or “Have you seen this cool book?” or “ring chain chain ring”. It’s fistbumps and high-fives, it’s the click-clack of mechanical gizmos, it’s the quiet cursing over failed puzzle attempts and collapsing polyhedra, it’s the giggles as another unsuspecting victim suddenly twigs what Adam Atkinson’s mediaeval French poetry books really are.

It’s an amazing weekend. I wouldn’t miss it for the world.

One Response to “Big MathsJam Highlights, 2018”