Here’s a roundup of some mathematical news we didn’t yet report from the last month.

The makers of documentary film ‘Olga Ladyzhenskaya’, detailing the life of the Russian mathematician, have released a five-minute trailer giving a flavour of the film. (via ICM Intelligencer)

According to a new ArXiV paper, the triple bubble conjecture (a result about the shapes taken by surfaces that are attempting to enclose a volume, or in this case three volumes, with minimal surface area) has been solved. (via Ian Agol)

The Lean community, who use and blog about the Lean proof assistant, have announced completion of the liquid tensor experiment – proving the main theorem of liquid vector spaces (me neither) and thereby formalising a big serious proof using the system. (via David Eppstein)

A big month for prizes, with the announcement of the 2022 Fields medals, awarded to Hugo Duminil-Copin, June Huh, James Maynard and Maryna Viazovska, as well as the 2022 Christopher Zeeman medal, which has been awarded to Simon Singh.

The Heidelberg Laureate Forum is an annual gathering of maths and computer science prize laureates, including Abel Prize winners and Fields Medalists, together with 200 young researchers from across maths and computer science. It’s a great opportunity for the researchers to meet each other and the Laureates, and see talks from the leading lights in the field. From the HLF press release:

The 7th HLF will take place from September 22 to 27, 2019 […]. This prominent, versatile event combines scientific, social and outreach activities in a unique atmosphere, fuelled by comprehensive exchange and scientific inspiration. Laureate lectures, young researcher workshops and a structure welcoming unfettered discussions are the elements that compose the Forum’s platform.

Over the course of the weeklong conference, young researchers will be given the exclusive possibility to profoundly connect with their scientific role models and find out how the laureates made it to the top of their fields. As described by a young researcher, “It’s a life-changing experience. Getting the opportunity to actually speak to the laureates in close contact can really shape us.”

Applications are now open (until 15th February) for the 2019 HLF – if you are or know someone who’s an undergrad, postgrad or postdoc in maths or computer science who might enjoy a week away in scenic Bavaria with some of the world’s greatest mathematicians and computer scientists, applications can be made at application.heidelberg-laureate-forum.org.

You may know from our recent foray into breaking news that the Fields Medal awarded to Caucher Birkar was stolen, minutes after it was awarded. It turns out the International Mathematical Committee (IMU) had a spare medal in Rio for display purposes, and they decided to award it to Birkar as a replacement.

Birkar is quoted as joking “I’m much more famous than I would be,” in reference to the increased media attention following the theft. Being the first person in the world to ever receive the Fields Medal twice certainly makes him a good answer to a trivia question at your next maths-themed pub quiz.

A post from the International Congress of Mathematicians (ICM) tries to play down the incident. ICM Chairman Marcelo Viana called it a “regretful incident with a happy ending” – slightly strange as the stolen medal hasn’t been found – and Birkar himself is quoted saying how lovely Rio is.

“I’m more famous now than I would be”, jokes Birkar.

Have you seen this medal?

Reports are emerging of the disappearance of one of the Fields medals awarded today, to Cauchar Birkar. The official statement from the International Congress of Mathematics is reproduced below.

The organizing committee of the International Congress of Mathematics (ICM2018) profoundly regrets the disappearance of the briefcase of mathematician, Cauchar Birkar, which contained the Fields Medal he received at this morning’s ceremony.

Images recorded at the event are being analyzed. The organizing committee is cooperating with local police authorities in their investigation.

More as we get it. (Shuffles papers.)

UPDATE (morning of 2nd August): The briefcase has been found by a security team under a bench, with the medal missing. Birkar’s phone and wallet were also in the briefcase. The thief is said to have been identified from security footage, so hopefully the medal can be found.

The event was also troubled earlier in the week by an accidental fire on the roof of the building, which caused the event’s overnight team to evacuate.

World’s most prestigious maths medal is stolen minutes after professor wins it, at The Guardian

UPDATE (evening of 2nd August): The ICM have published these photos of the suspects.

Who stole Birkar's Fields medal? | Help us spread these images and identify the suspects! pic.twitter.com/rX5E9dsigw

UPDATE (evening of 3rd August): The ICM have announced that Birkar will receive a new medal at noon (in Rio) tomorrow. 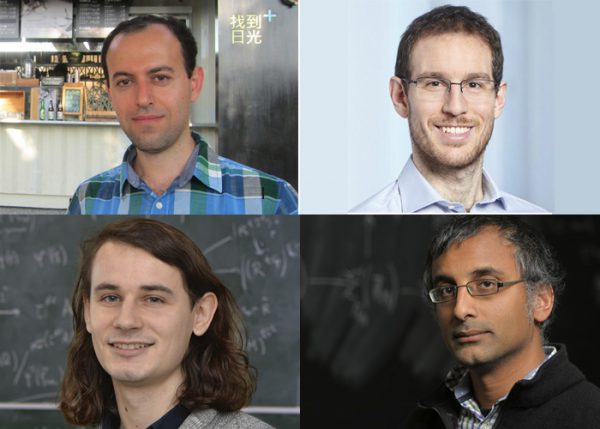