Some grad students at Carnegie Mellon had a fun idea: what if each slide in a presentation was made by a different person, based only on the previous slide?

Being grad students and thus having nothing better to be getting on with, they did just that, and nominated one of their number to deliver the resulting presentation without having seen any of the slides in advance.

Watch the video below. Prepare to hear lots of nerdy giggling.

Following my previous post, “ASCII Me“, the TEXTp ‘feature’ is no longer available after April Fools Day, so here is a video of what it looked like.

YouTube have introduced a text-only mode for April Fool’s Day – TEXTp. If you view a video, where the choice of quality – 360p, 480p, etc. – is, you can choose TEXTp. Here is what I look like in ASCII characters giving my cryptography talk (click to enlarge): 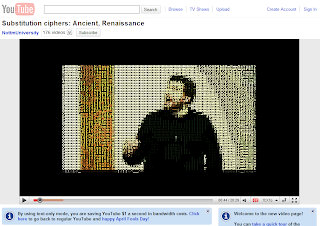 Here is a link to my video in text mode, for as long as this feature is available: “Substitution ciphers: Ancient, Renaissance in TEXTp“.

UPDATE: I’ve just remembered that the videos I did for my PGCHE are clearer, so here is a screenshot from the first of these, “PGCHE Portfolio Introduction”, in TEXTp: 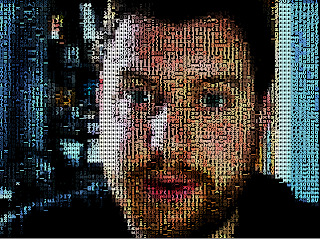 UPDATE 2: Following the removal of the feature, see the next post, “TEXTp lives!“, for a video of TEXTp in action.

If you use Facebook, you may be familiar with the groups based on the ‘million march‘-principle, who are trying to get to a certain number of members to affect some change.

A lot of these groups are outright silly, or based around issues unlikely to drum up the enthusiasm of the masses. A quick search finds individuals offering to give up smoking, get a tattoo and eat their keyboard. Groups range from the unbelievable “If this group reaches a million, I’ll name my kid after a diacritical mark“, to the much more grounded in reality* “If this group reaches 1,000,0000 NOTHING will happen“.
(* in concept, although the representation of numbers leaves something to be desired)

Anyway, earlier this week I saw an xkcd cartoon suggesting the Facebook group of a Tautology Club be called “If 1,000,000 people join this group, it will have 1,000,000 people in it”. And today I was invited to join “Aleph-One Strong for the Generalized Continuum Hypothesis!” by Tony Mann, who wrote:

This group wants Aleph-1 members so it can test the Continuum Hypothesis. It already has almost 700, so only another Aleph-1 are needed. As the group says, invite all your friends to join, but if you only have finitely many friends you’re no use to them.

On the group Wall, member Justin Howard Wilson has a way to check on the progress of the mission: “Are we there yet? *Counts members* Crap, I’m still able to count them!”

…or is it just reflecting mine?

Inspired by a suggestion on Twitter to ask Wolfram|Alpha “Are you Skynet?” I had a look around for other geeky easter eggs. Here are a few:

What happens at 88mph?
What is the meaning of life?
What is the average speed of a swallow?
Hello, World
Open the pod bay doors
All your base

How many roads must a man walk down before you can call him a man?
If a tree falls in a forest and no one is around to hear it, does it make a sound?
What is the sound of one hand clapping?

I also tried a lot of others that Wolfram didn’t understand. Of course, I would rather it got better at the whole making the world’s knowledge computable thing than develop new jokes but nice to see a sense of humour from the developers.

For a comprehensive list of Wolfram|Alpha easter eggs, follow the directions under: What are your easter eggs?

Last week at Meet the Mathematicians I saw a talk by Jon Keating , “Some thoughts on the unreasonable effectiveness of mathematics” (an essay by Wigner). One element that I have taken away from this was when Jon was talking about the unexpected connections between mathematical concepts, illustrated using the normal distribution (an example from the original essay). The bell shaped curve depends on the mean and the variance, which is perfectly reasonable. The curve depends as well on pi. So Jon posed the question: If you take a large group of people, measure their heights (or other body parts, or lots of other types of data) and arrange them on a histogram, what has that to do with the ratio between the circumference and diameter of a circle?

As many will know, at the start of episodes of the Travels in a Mathematical World podcast I give a number fact. My intention at the start was that I would also point out when numbers are prime, buoyed on by enthusiasm for prime numbers.

In episode 9 of the Travels in a Mathematical World podcast, the first of two in which Dr. Adrian Bowyer talks about his fascinating career, I make an extraordinary claim: 9 is prime. There’s a joke along these lines:

How to prove that all odd integers greater than or equal to 3 are prime.

and so on. There are more of these all over the web, including a substantial list on gdargaud.net.

I think we might just have to assume I switched off my mathematical brain for that week. Anyway, I am grateful to an anonymous poster on the show notes for episode 9 of the Travels in a Mathematical World podcast for pointing out my error. I wonder if the first 294 people who downloaded the episode: (a) didn’t notice; (b) noticed but didn’t tell me; or, I suppose, (c) downloaded the episode but didn’t listen to it. Any of these leaves me a little disheartened.

This also led me to look at the other prime episodes and realise my original intention of noting prime number episodes is erratic at best. Quite apart from the erroneous, I state the fact for episodes 2, 3, 7, 13 and 17 but am guilty of omission in episodes 11 and 19. Episode 23 will be the next maths news episode and we will see if I remember to note the fact.