As is traditional, I’ll start with some facts about our Carnival number, 145. 145 is a pentagonal number, and a centred square number. This diagram of 145 things arranged in a pentagon was generated using Andrew’s ridiculous Polygonal Number Calculator, on Matt Parker’s Things to Make and Do in the Fourth Dimension website.

It’s also a factorion, which is a flipping superb property for a number to have – it’s equal to the sum of the factorials of its digits, that is to say

Anyway, you’re not here to learn about interesting properties of numbers! You’re here for maths blog posts, so here’s one about a number with interesting properties: Sam Shah, over at Continuous Everywhere But Differentiable Nowhere, has posted about Graham’s number and how to teach 9th-12th graders (KS3/4) about it. Relatedly, a fun post from Tim Urban over at Wait But Why takes us up to Graham’s number from 1,000,000, with some cool facts about the quantities you meet along the way.

Interesting properties of numbers continue, with a post from Dave Richeson on Division By Zero, comprising Seventeen facts about the number seventeen (n of them will shock you!). James Propp over at Mathematical Enchantments has some more ways to convince people that $0.999\ldots = 1$, and why our innate understanding of how numbers work might be to blame for any doubt.

If you’d like to remind yourself it’s possible to find mathematics amazing and beautiful, even if you’re not a full-time card-carrying professional mathematician, read this New York Times article by psychiatrist Richard A. Friedman describing his fascination with the beauty of mathematics. Speaking of beautiful mathematics, Alex Bellos and Edmund Harriss’s new mathematical colouring book gets a feature post over at The Guardian, with plenty of pictures.

The wonderful Evelyn Lamb, on her Scientific American column Roots of Unity has blogged about her discovery of a second (yes, there’s two) female mathematician who has a street named after her in Paris, Marie-Louise Dubreil-Jacotin. She’s also discovered a gorgeous octagonal tiling, which you’ve almost certainly seen before but never noticed. 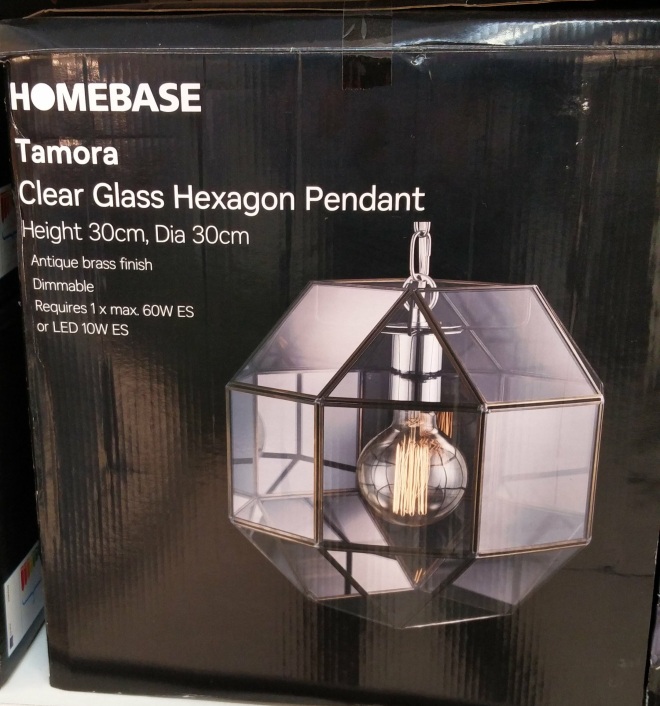 Bow Tie Teacher has documented an effort to find correctly-named mathematical shapes in home decor shops, and the interesting names some shops have come up with for the objects – since when is this a hexagon (right)‽

Over at The Conversation, USyd’s Stephen Woodcock writes about some statistical paradoxes and fallacies, accompanied by some truly magnificent cumulonumbers. Karl Kruszelnicki at Australia’s ABC Science blog recalls Joseph Keller and his wonderfully simple real-world maths applications, including why ponytails swing from side to side if you’re running forwards.

The Cambridge Mathematics blog has a nice post about teaching sequences using coding, and Colin Wright has written up a nice mathematical game he discovered at an event recently. Meanwhile, Brian at Bit Player has been messing around with factorials and squares and Tony at Tony’s Maths blog has found something in a cupboard.

Now on to some videos! While Matt Parker’s Standupmaths YouTube channel has been mysteriously quiet this month, some new videos have gone up on Numberphile, including one featuring Matt on The 10,958 Problem (the challenge is to write an expression for 10,958 using the digits 1-9 in order and some operations) along with a solution video, and one featuring Twin Prime conjecture maestro Dr James Maynard, describing some recent developments on the problem.

I’ve managed to continue my YouTube efforts with an Easter special – on how to construct an egg shape using arcs of circles. Arguments about what shape an egg actually is, or banter about how many times I’ve said ‘compass’ instead of ‘pair of compasses’ during the course of the video, in the comments, please.

And finally, enjoy this wonderful Twitter thread from geophysicist and science writer Mika McKinnon on the geometry and engineering that went into some of the outfits at this month’s Met Gala:

The engineering casually on display at #MetGala never fails to impress me. I do nearly every textile craft . That’s mindblowingly hard: https://t.co/pGzmp6u2h9

That’s it for this month! Next month’s Carnival will be hosted by Peter at Boole’s Rings, and you can submit your favourite blog posts/videos/content from the month of May. If you’d like to host an upcoming post, please get in touch.

One Response to “Carnival of Mathematics 145”