I’m not very keen on “Puzzle for Toay”. The puzzles are very often just a means of shoehorning in a fun maths fact, or rely on you understanding the conventional mathematical meaning of a fairly common word. Each puzzle is only read out once, by a bemused-sounding presenter, and the solution isn’t even broadcast – you have to check the Today programme’s website the next day. What a waste! Rob Eastaway wrote a blog post recently about the ways in which the slot could be done better, which I pretty much agree with all of.

Nevertheless, having a puzzle read out on the radio with my name would’ve been nice, so I quite fancied doing it. That’s not completely selfish, is it?

I came up with some guidelines for a good Today programme puzzle:

I’ve been thinking recently about how we tend to look for abstraction in maths problems, and dismiss particular instances as uninteresting. For example, I think most people would say that showing there are infinitely many prime numbers is “better maths” than saying that the number 15551 is prime. But 15551 really doesn’t look prime! That’s interesting! And the calculation involved in working out if it’s prime or not is good exercise for the brain.

A mathematician wakes up in the night to find a small fire at the end of his bed. He springs awake, gets out his pen and paper, writes down a general method for putting out fires, and goes back to sleep.

Have you ever used a fire extinguisher? It’s really fun.

So I’m all about doing concrete examples of things at the moment. I wondered if there was a Fun Maths Fact that holds for all the natural numbers, say, that I could turn into a puzzle of the form “Does this Fun Maths Fact hold for (An interesting $N$ I’ve picked)?” If you add some framing round it, it doesn’t even have to be obvious that your puzzle is about the Fun Maths Fact.

I came up with something that doesn’t perfectly fit the guidelines I came up with, but I’m still fairly pleased with it, particularly since it doesn’t appear that I’ve reinvented an existing puzzle.

Here’s what I came up with:

5 people go for dinner at a restaurant with a funny rule: the seats around the table are numbered 1 to 5, and each patron pays the difference between the numbers on the seats directly to either side of them. How should the waiter arrange the seats to maximise the total bill? 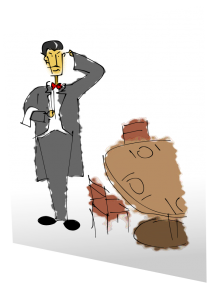 It’s a bit too long, and quite awkwardly worded. I tried it on a few of my less-mathematical family members and they all at least got the intention, even if they weren’t willing to try to find a solution.

The biggest opportunity for misinterpretation is “difference = left – right”, not taking absolute value as I intended. You’d have to break symmetry to do that – why left minus right instead of right minus left? – and some people would end up paying a negative amount, but anyway, in that case the bill is always 0, so you still get a nice result that you might even be able to prove without writing anything down.

The puzzle talks about 5 people, but clearly you could generalise that to any number of people. I don’t want to give too much away, but I’ll say that I didn’t start with a fun maths fact and I don’t know a general solution. I’m not great at solving puzzles, so you might be able to come up with a general solution, but it certainly isn’t easily searched for.

Nevertheless, the puzzle with the number of people I picked has a nice, simple solution. It might even be the first one you try!

I’ll admit I’m a bit disappointed that my puzzle wasn’t used, but I am pleased to have come up with an interesting problem. I really want to further investigate the idea of producing puzzles by picking particular instances of abstract statements – I think it worked well.