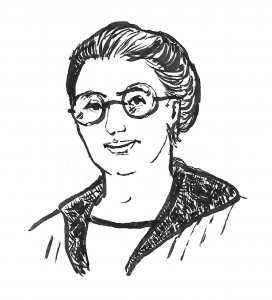 We’ll be posting a list of 30 daily drawing themes on this site just before the start of November, and we’re inviting you to join in. Whether you’re an artist with an interest in maths, or a mathematician who likes to doodle, no skill level is too low or too high: we just want to celebrate Emmy and make some nice pictures. Tweet your images with the hashtag #Noethember; we’ll create a short link to the theme list and a brief explanation you can point people to if they’re curious.

If you’d like to help us put together the list of daily themes, or have any good Noether facts (or facts about women in maths generally) we could include, we’re using a shared Google Doc to curate the list.

We’ll also try to retweet our favourite submissions through the month from our @Aperiodical account, and will collate some of the entries here in a wrap-up post (or two) at the end of the month. Follow Constanza (@Coni777) for more maths/illustration chat!

5 Responses to “#Noethember: illustrating a life”