This is astonishing. Designer and ‘data geek’ Nicholas Rougeux has painstakingly recreated all six books of Oliver Byrne’s Euclid on the web, following the original as closely as possible while adding links between propositions and even making the diagrams interactive.

It’s absolutely gorgeous, just like Byrne’s original. And just like the original, I’m a little bit agog that anyone has gone to so much effort to make such a comprehensive work.

If you’ve never seen Byrne’s Euclid before, let me share the joy: in 1847, Irish mathematician Oliver Byrne published an edition of Euclid’s Elements which aimed to present the entirety of the first six books, using symbols instead of letters wherever possible. It was one of the first multi-colour printed books, making it fantastically costly to produce, but the result is uniquely striking.

Rougeux’s reproduction is impressively faithful: you can compare it with pages from the original, scanned in by Bill Casselman.

There was a renewed interest in the books when Taschen reprinted them in 2010. I’m such a big fan that Byrne’s Euclid was my first reference point for the look of The Aperiodical when we began in 2012.

Spot The Aperiodical’s logo in book 3:

There’s also a poster for sale, containing the diagrams for each proposition across all six books. 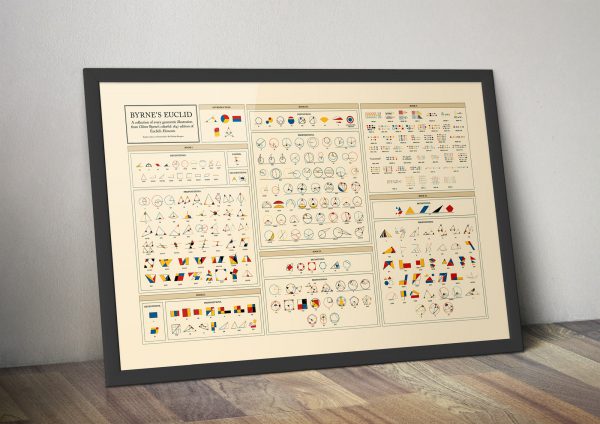 Nicholas Rougeux has written an in-depth blog post about how he made it, taking advantage of all sorts of new whizz-bang web technologies.

2 Responses to “Byrne’s Euclid recreated for the web”