It’s been two months since I last wrote one of these!  March was a haze of overwork and stress for me, so I didn’t write a recap for March’s MathsJam while it was still March. Peter Rowlett, who was visiting Newcastle as part of his mission to avoid having to think up new puzzles for MathsJams by always attending different ones (and also to give a talk at the university) has kindly sent me his notes, so here’s what I’ve reconstructed: 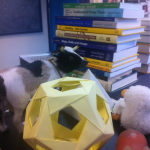 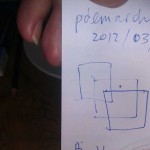 Manchester: A puzzle from Lewis Caroll: draw this shape without retracing or lifting your pen. Now, write a program that draws it in LOGO! 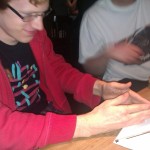 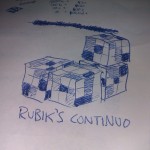 Manchester: Andrew has invented a game to keep all the MathsJams occupied for the foreseeable future. 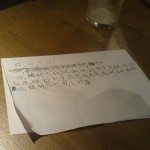 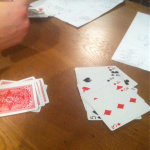 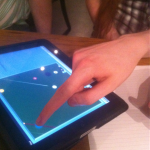 Newcastle: playing pool on a torus. Next up: Klein bottle. 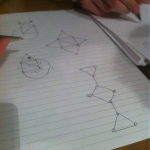 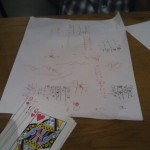 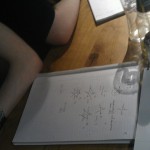 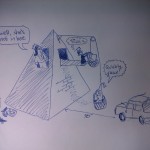 If you’ve taken a picture at a MathsJam and you’d like to share it, please submit it to our tumblr. 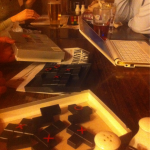 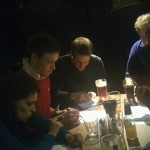 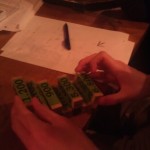 Newcastle: trying to arrange these blocks so that they form a correct sum. 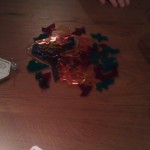 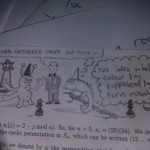 Manchester: inspired by today’s puzzles, @Andrew_Taylor has drawn this 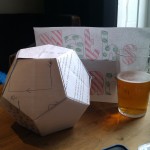 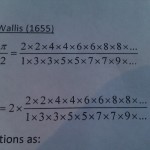 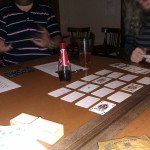 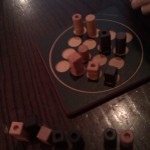 Manchester: yet another game of Quarto 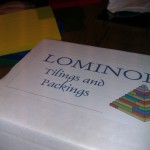 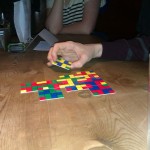 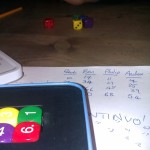 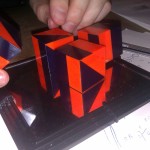 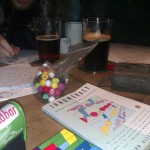 February’s MathsJam was loads of fun! We had a record attendance of 14 cheery people who just about managed to fit around the biggest table in the Charles Grey.

After last month’s puzzlocalypse, which left me for over a week unable to count the toes on my feet, I wanted to have a nice relaxed evening. January’s MathsJam was a bit massive. It’s now a week later and I’ve only just gathered enough thoughts together to do this writeup.

Things didn’t start out that way, though. A few weeks ago I found the website of a mathematician in Illinois called Alan Schoen, and his page about Lominoes. They’re a pretty interesting set of shapes!

Amazingly, December’s MathsJam had a non-trivial attendance of six whole people. And not just any people! Puzzling heavyweight David Cushing had yet more Renaissance-era riddles to test us all, and the other regulars were in similarly bamboozling form.

I balanced things out by failing to prepare anything or bringing anything to take notes on and subsequently forgetting most of what the others talked about. So this isn’t going to be a very accurate record of what happened, unless I get some reminders in the comments.

I’m going to start with a rather lengthy deconstruction of a puzzle Matthew Taylor posed:

A “lights out” puzzle

Matthew posted this puzzle on twitter a couple of days before the MathsJam night.