If anyone remembers October 2012 (ahh, those were the days) you might recall we wrote about Aperiodipal Matt Parker, and his crazy project to build a computer out of dominoes. Well, it happened, but not much has happened since – sorting out a video of the event has taken a while. But it’s ready now! And it’s great! 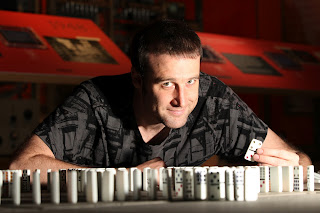 In case you weren’t already excited enough about Matt Parker’s Domino Computer (see: Math/Maths Episode 112, and articles on this website), the Manchester Science Festival blog has posted an official press release about the event, including photos of the domino assembly team lying around on the floor (none of us are professional models, but we did our best for the camera), and quotes from Matt about how important domino computers are.

Top marks go to sometime Aperiodical author Paul, for looking super-bored in the group photo. I’m sure he was thinking about hard maths.

This month saw a record high turnout, requiring as many as three tables being pushed together, a whole bag of maltesers and a tin of shortbread someone got for Christmas and hadn’t eaten yet. We also had one new attendee who had previously been a regular at Newcastle MathsJam, and has now moved to Manchester for a PhD. Not that it’s a competition or anything, but in your face Newcastle. In fact, the turnout was so large that I couldn’t even keep track of everything that was going on, and when I collected in all the scrap paper I found people had written down several things I wasn’t aware we talked about, including the method for cube rooting large numbers used by Maths Busking.

Friend-in-good-standing of The Aperiodical, Matt Parker, has something big planned for Manchester Science Festival and he needs your help.

Matt is trying to build a computer out of dominoes.