Q for my maths tweeps – recommendations wanted for Maths Journals suitable for a bright and engaged Sixth Form student. Suggestions?

It led to a flurry of interesting replies, and here’s some of them. I know I usually write up the goings-on at Manchester MathsJam, but since I spent much of the last month ‘In Residence’ at the University of Greenwich, I spent the second-to-last Tuesday evening of May at the London MathsJam. Here’s a summary of what transpired.

Noel-Ann Bradshaw of the University of Greenwich has been trying to get a group of London Universities together to cross promote events. In London there is such a concentration of universities and such a lot going on that it makes sense to cross-promote events between students at different universities. Anyway, this group is going well and Noel-Ann has posted 3 new events on the Facebook group “London University Maths Societies – IMA”, namely:

“The man who invented the concept of pi: William Jones and his circle”
by Patricia Rothman
William Jones was important in his lifetime primarily for three things: he was the first person to use the Greek letter π in its modern sense; he had acquired such a significant archive of manuscripts that he was appointed to the Royal Society committee, to investigate the invention of calculus; and he was influential as communicator in a network of mathematicians, astronomers and natural philosophers in the early eighteenth century.
This lecture will also touch on the lives of some of the notable characters of the seventeenth and eighteenth centuries who contributed to his story.
22 January 2009 13:15 – 13:55
Darwin Lecture Theatre, UCL
Facebook event; UCL page.

Finding Moonshine: A Mathematician’s Journey Through Symmetry”
by Marcus du Sautoy
Symmetry is all around us. Our eyes and minds are drawn to symmetrical objects, from the sphere to the swastika, from the pyramid to the pentagon. Of fundamental significance to the way we interpret the world around us, this unique, all-pervasive phenomenon indicates a dynamic relationship between objects. In chemistry and physics, the concept of symmetry explains the structure of crystals or the theory of fundamental particles. In evolutionary biology, the natural world exploits symmetry in the fight for survival. What’s more, symmetry – and the breaking of it – are central to ideas in art, architecture and music. This talk takes a unique look into the mathematical mind as Marcus explores deep conjectures about symmetry. These conjectures have culminated in the most exciting discovery to date – the summit of mathematicians’ mastery in the field – the Monster, a huge snowflake that lives in 196,883-dimensional space with more symmetries than there are atoms in the sun.
3 February 2009 18:00 – 20:00
Oliver Thompson lecture theatre, City University
Facebook event; City University page; The book; Marcus’ blog.

“Bertrand Russell: Man of Dissent”
by Ivor Grattan-Guinness
16 February 2009 6.30-8pm
New Theatre, East Building, LSE
Russell argued against the Great War, but he also wanted to drop atomic bombs on the Soviet Union after WWII, and later advocated nuclear disarmament. How could a great logician accommodate such inconsistencies? How, as a private citizen, did he make such a world-wide impact?
Ivor Grattan-Guinness is Emeritus Professor of the History of Mathematics and Logic at Middlesex University, and an associate member of CPNSS. He has written widely on Russell’s logic and philosophy, and has been an Advisory Editor on the Russell ‘Collected papers’ edition since its inception in 1979.
Facebook event; LSE page.

If you are in London or can get there sometimes I would recommend joining the London Maths Facebook group for event notifications.

I attended the first day of ECMI 2008 at University College, London. I’m afraid I got a bit too distracted by attending talks to take many pictures, so the one below will have to do. Perhaps I should title it “ECMI 2008 Opens Doors”?

I attended talks in the Maths and Society strand. These were interesting and thought-provoking. I attended the welcome reception in the evening but had to go home for other commitments later in the week. The conference was week long and I am told a good success. 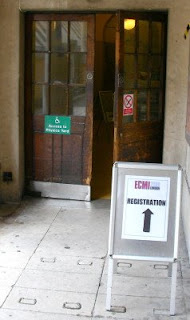