This is nearly it: the second semi-final of The Big Internet Math-Off, pitting Edmund Harriss against Matt Parker. 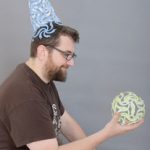 Edmund Harriss is a mathematical artist and a professor at University of Arkansas. Among other things, he’s the co-author of Snowflake, Seashell, Star, a mathematical colouring-in book. You can find him on Twitter at @Gelada, or on his homepage. He got through round 1 with a blatant appeal to the Aperiodical’s readership, in the form of a set of aperiodic Penrose tiles, and it’s been conjectured his victory in round 2 with the Collatz sequence was inevitable. 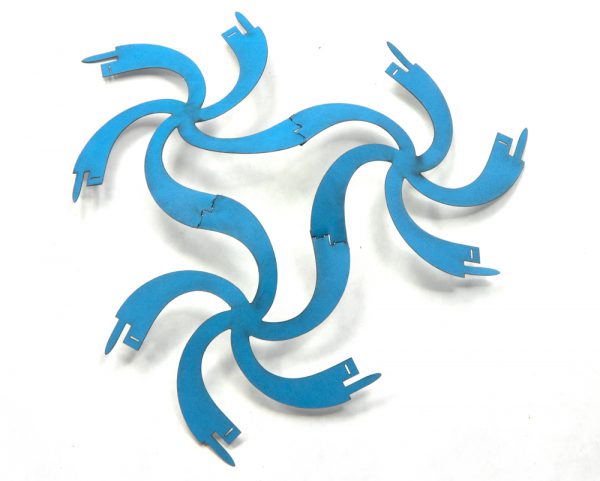 *David Attenborough voice* The simple triangle, here in its natural habitat of the mathematics blog post. Yet if we look closely this is no ordinary triangle. The clear five fold symmetry of each corner demonstrates that the angles are a fifth of a circle or 72 degrees, three such angles make up 216 degrees, not the commonly observed 180. *Return to normal voice*

What is happening here? Another difference with this triangle is that it does not lie flat on the table, instead bending up. Connecting more such triangles increases this effect each triangle adding a little more curve until the result closes up and a ball emerges. 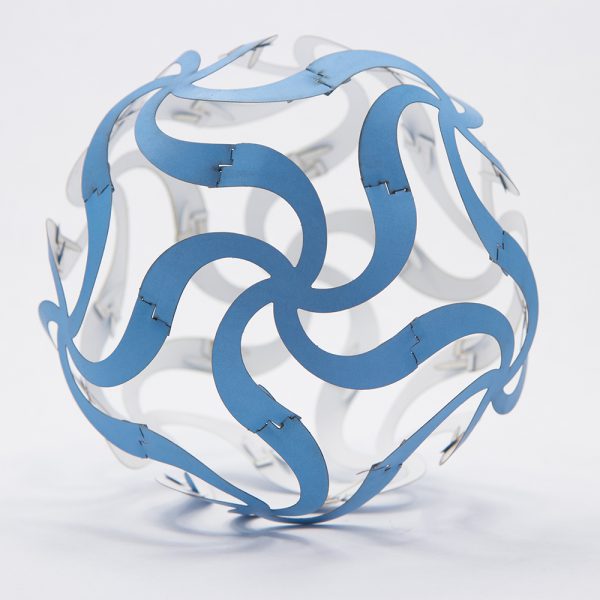 The angle difference between this triangle and 180 degrees and the way it curves are intimately linked, a fact studied by Carl Gauss and first published by Pierre Bonnet in what is now known as the Gauss-Bonnet theorem. Along with Gauss’ “Theorema Egregium” (not egregious, but “remarkable”), this result lies at the heart of the study of surfaces and at the start of a chain that leads to very powerful mathematical results with names like “Riemmann Roch Theorem” and “Atiyah-Singer index theorem”. It could be studied by a heroic pile of calculus and the mathematics of Differential Geometry. Yet this is calculus you can get your hands on.

You have seen my paper system Curvahedra, above. These ideas can be used to turn all sorts of flat materials into forms. So metal sheets also work: 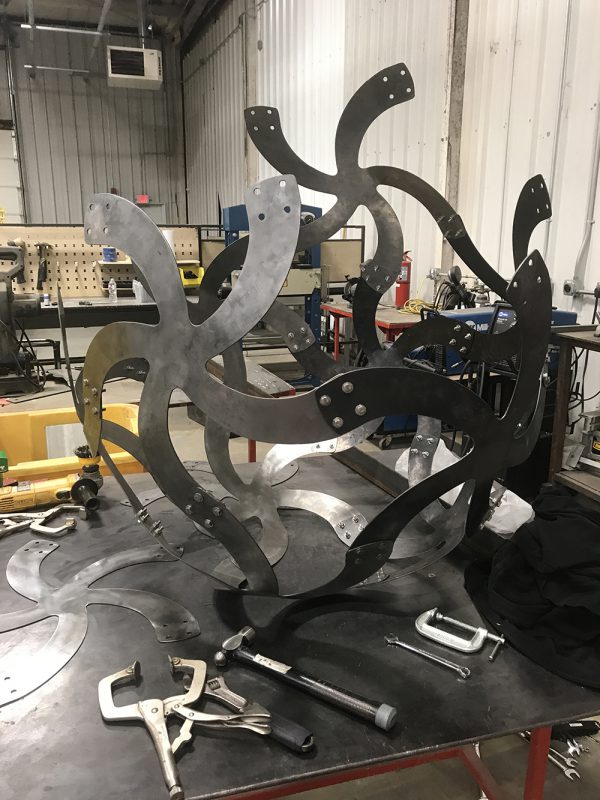 and the resulting sphere is a lot of fun:

Unfortunately though, you probably do not have a plasma cutter lying around, but all you need to start is paper, scissors and tape. Cut some strips of paper, and tape them together at the corners. As you tape you can control the angles involved. Here is a triangle with three 90 degree angles. 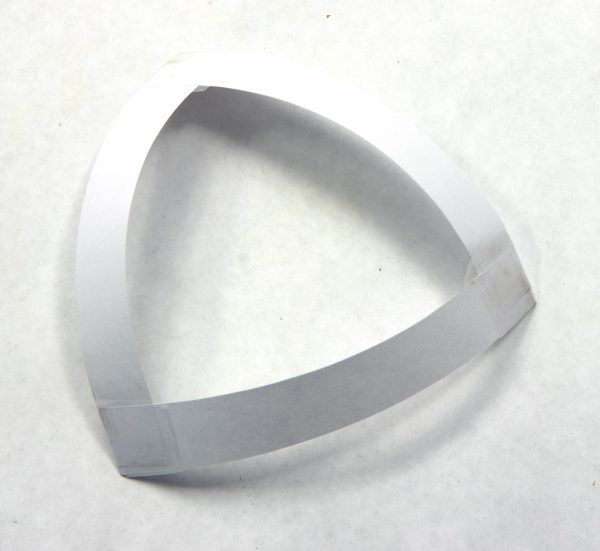 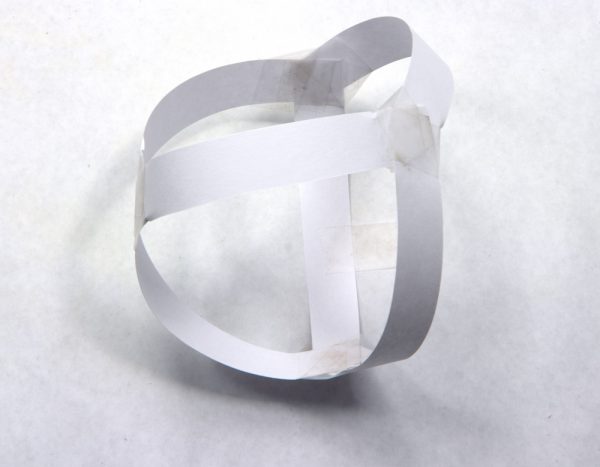 Some places to explore more on the mathematics of surfaces are Crocheting adventures in Hyperbolic planes by Daina Taimina for a geometric hands on approach, or Euler’s Gem for a topological and historical one. A more mathematical study, at an undergrad level is Mostly surfaces by Rick Schwartz. 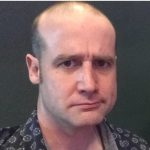 Matt Parker is a standup mathematician with a lot of jobs. He’s one third of the scientific comedy group Festival of the Spoken Nerd, author of the book Things to Make and Do in the 4th Dimension, he sells mathematical toys at Maths Gear, he frequently features on Numberphile, and he does stuff for schools through Think Maths. You can find him on Twitter at @standupmaths, on YouTube, or at standupmaths.com. He got through round 1 with a pile of matchboxes that can play noughts-and-crosses, and then did a victory lap (we think) in round 2 with the projective plane.

Congratulations to the Aperiodical for running the Big Internet Math-Off, a celebration of voting. We’ve all had a great time. They have certainly come a long way since their first ever article in 2012… which was about how voting is terrible.

“Electoral reforms and non-transitive dice” by Andrew Taylor took the ever-popular non-transitive Grime Dice (already featured in #bigmathoff) and used them as a way to explore voting (the very foundation of #bigmathoff). The article comes from a simpler time when choosing a voting system was the most controversial referendum facing the UK population, but is definitely still worth a read.

The moral of the story is that all voting systems are rubbish. Mathematically, none of them will fulfil all the various ‘fairness requirements’ people have. Andrew covers Condorcet’s Paradox in some depth and touches on Arrow’s Impossibility Theorem.

I can demonstrate this problem by breaking Ranked-Choice Voting; my favourite of the voting systems (Australia has used it since 1918, a century of voting precision). This is where everyone who votes ranks the candidates in their order of favouriteness and the election is decided by this algorithm:

1. Count how many “first votes” each candidate received.
2. If a winner has more votes than all of the others combined: they win.
Else: Remove the candidate with the fewest votes and pass those votes to each voter’s “next choice”. Go to Step 1.

Sometime known as the “Alternative Vote” CGP Grey did a video about as part of his voting series and I wrote about it for the LA Times (now blocked in the EU, take that as whatever kind of political statement you wish). AV is a great voting system. But check out these results I just made-up for five hypothetical voters ranking four candidates:

We can see that candidate A has crushed candidate B; all five voters have ranked A higher than B. But B is not last, they are more popular than C: in a B vs C situation voters 2, 4 and 5 all prefer B and only 1 and 3 prefer C. And finally: C is more popular than D, three votes to two.

This would imply candidate D comes last… if the results were transitive. Which they are not. In an A vs D match-up more people prefer D to A. Following the Ranked-Choice Voting algorithm A would be declared the winner of this vote but D could correctly point out that more people voted for them over A (voter 1, 3 and 4 all ranked D higher than A). That doesn’t sound fair. The system is broken!

What I have found is called a “pathological example” in maths: I have deliberately crafted it to break the system. Which in mathematics is important because we want absolute truth and a single crafty counterexample can reveal a statement is false. But in the real world they can be disingenuous. These corner cases tend to lurk well outside normally operating situations. The existence of Arrow’s Impossibility Theorem doesn’t mean we shouldn’t use the best voting system available.

And the Big Internet Math-Off is good enough. We have known since 1975 that for any system with fewer games than participants: a single-elimination tournament is the best option available. And each head-to-head is decided by a “first past the post” voting system, which is perfectly good when there are a maximum of two candidates.

The only pathological case which could break the Big Internet Math-Off voting is a tie. This is very rare in first past the post votes and hard to game as no one knows the running total. But for #bigmathoff we do see votes as they happen.

So, I’m not telling you that everyone should use the algorithm of simply voting for whoever out of me and my opponent has fewest votes, leading to a pathological-case tie, but THAT WOULD BE HILARIOUS.

You are free to either DO THAT AND BREAK THE SYSTEM or, you know, vote however you want.

The poll closes at 9am BST on the 21st. Whoever wins the most votes will get the chance to tell us about more fun maths in the final.

Come back on the 24th for the Grand Final, or check out the announcement post for your follow-along wall chart!