After Sir Michael Atiyah’s presentation of a claimed proof of the Riemann Hypothesis earlier this week at the Heidelberg Laureate Forum, we’ve shared some of the immediate discussion in the aftermath, and now here’s a round-up of what we’ve learned.

Firstly, it’s become clear that the work presented by Atiyah doesn’t constitute a proof of the Riemann Hypothesis, so the Clay Institute can rest easy with their 1 million dollars, and encryption on the internet remains safe. The argument Atiyah put forward rests on his function $T(s)$ having certain properties, and many have concluded that no function with such properties can exist, including in a comment on our own post from an academic who’s written about the Riemann Hypothesis extensively. Dick Lipton and Ken Regan have written a blog post looking at the detail of how $T$ is supposed to behave. According to some sources, Atiyah has stated he’ll be publishing a more detailed paper shortly, but not many are holding their breath.

This is not easy mathematics, and even top-level mathematicians sometimes find their proofs don’t hold together; it’s no surprise that a solution to this problem wouldn’t be found in a few lines of mathematics, and it’s just a shame that this was so built up and sensationalised when it’s becoming obvious that Atiyah didn’t consult with anyone else about his proof before presenting it in a public forum.

Atiyah’s is by no means the first claimed proof of the Riemann Hypothesis of recent years; many end up in the wastepaper bins of academic mathematicians around the world, who get sent them in handfuls. Only some claimed proofs get this level of attention though, and this one has been somewhat unique in that it was taken a lot more seriously than usual.

You might remember that a few years ago, the BBC reported that Opeyemi Enoch had proved the Riemann hypothesis, and we immediately said “no, he hasn’t”. Now Sir Michael Atiyah claims he’s proved it, and before his lecture we said “well, let’s see”. Why the difference?

Enoch looked like any crank: went straight to the wrong venue – BBC News, not other mathematicians – didn’t publish his proof in the open, and presented it at a very scammy looking conference run by Nina Ringo, who has previous form. And we’d never heard of him: the false-positive rate for “anyone on the planet” with a claimed big proof is much, much higher than for, say, professors of maths in big universities. So for all those reasons, we were fairly sure he hadn’t done it, like I can fairly confidently say you’re not holding a winning lottery ticket right now.

Atiyah, on the other hand, has a Fields medal, an Abel prize, and a very long list of publications. We still thought he probably hadn’t proved it, based on his other recent pronouncements, but he said he was going to present his proof, so we gave him the benefit of the doubt.

It’s also valid to ask, why was Atiyah given such a prestigious platform to present his work? Well, the HLF isn’t an ordinary academic conference – on their own website, they stipulate that “the Heidelberg Laureate Forum is not a classical scientific conference but a networking event meant to motivate and inspire the next generation of scientists.” The Forum doesn’t vet the talks submitted by the Laureates, as up until now they’ve never needed to – most people give talks about their historical achievements, or occasionally the work of their students, and some even give the same talk every year. It’s still fair to say that a word of advice to Atiyah, to maybe stick to a general historical account of the problem (which his talk mostly was) might have been useful, if he could have been convinced.

Atiyah’s proof is a very good example of what a proof isn’t: it doesn’t contain enough detail to convince someone of the truth of his argument, or even enough detail for someone to point to as wrong. There simply wasn’t much to it, and the real glory of maths is in the gritty technical details, all of which were missing from this. Broad strokes are useful to give an overview, but they need to be backed up with working out.

The press has been patchy in its coverage of both Atiyah’s presentation and the reaction to it. It’s been a good example of how ill-equipped the general press is to cover maths news – breathless coverage from The Times, The Mirror and The Independent reveal a distinct lack of skepticism – but for anyone outside of mathematics, it’s not easy to know whether skepticism is warranted. At least some outlets looked like they’d tried to ask a professional mathematician, but many claimed that nobody was prepared to comment – a point that Jacob Aron of New Scientist has complained about.

Quite a few places, including this Science Alert article (which was shared by the Australian Mathematical Sciences Institute on Twitter!) make slightly inaccurate claims, including “the hypothesis has been checked for the first 1,000,000,000,000 prime numbers”, and that’s not really how that works. Fortunately, we didn’t see anyone saying “it’s definitely proved”, but did see a few stories framed as “rivals disagree”, which isn’t quite how this went down.

One positive side effect of this whole affair has been the amount of buzz it’s created around the Riemann Hypothesis, big results like this, and maths in general. It’s reminded us how exciting it would truly be if someone were to prove a result of this nature, and it was cool to see hundreds if not thousands of mathematicians (and non-mathematicians) talking about the proof on social media.

“Being wrong isn’t a bad thing like they teach you in school. It is an opportunity to learn something.” – Richard Feynman

Some commented ahead of the proof announcement that they hoped it was a real proof, as otherwise it would be terrible for someone like Atiyah, being publicly seen to be totally wrong about something. This sentiment, or equivalents post-hoc, have been echoed with varying levels of concern for his reputation. We think that’s a really unhelpful thing to say: being wrong is an inevitable part of mathematics research, and it happens to everyone. Promulgating the idea that maths is all about being 100% right all of the time not only makes it harder for people at research level but is also one of the major reasons people are put off maths at an early age. Yes, it is possible on occasion to come up with an unassailably correct solution to a maths problem, unlike other disciplines which are more subjective in their assessment, but terror of failure causes some people to freeze up and not even try – when in fact being wrong is inevitable, and an important part of the learning process. That said, there are less public forums in which to be wrong, and as we’ve discussed, steering Atiyah towards one of those might have been kinder. 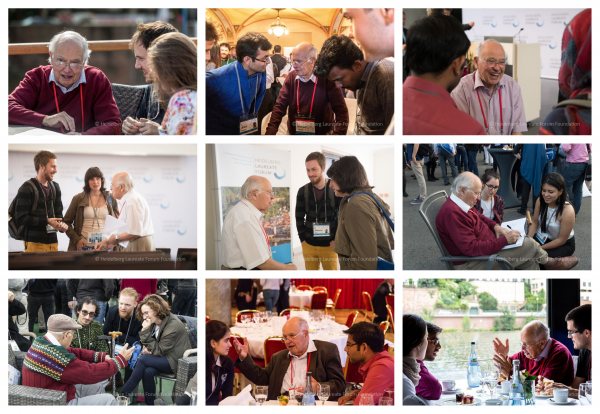 We wish Sir Michael a pleasant retirement in the knowledge that he has made a huge contribution to maths over the course of his life, and that shouldn’t feel lessened or soured by these events. It’s fantastic that someone can continue working on mathematics into their old age, especially if, through collaboration, they can inspire the next generation. We are grateful to him for his work.